Nasa Comercial was awarded the “Best Enterprise” award by the Europe Business Assembly. This award was received in January 2013 and was based on criteria such as: investment attraction, high technologies, quality, staff professional level and modern management methods.

Nasa Comercial was recently awarded the Arch Of Europe Gold award for quality and technology. This award was presented to Nascimento Alberto on the 30th of April 2012 in Frankfurt and is in recognition of Nasa’s contribution to the business world and its high standing and professionalism.

International Award Convention is part of the annual program of B.I.D., Business Initative Directions Awards, designed to recognize the prestige of the outsta 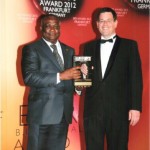 nding companies, organizations, and businessmen in the business world. This year, the International ceremony awards will be handed out at the Conference, in Paris, Frankfurt, New York, Geneva and London. The Ceremony will be attended by companies from different countries from Europe, America, Asia, Africa and Australia, together with leaders from different business fields, professionals from the worlds of tourism, economics, the arts and corporate image, quality experts, as well as academic personalities and representatives from the diplomatic corps. The event will be covered by reporters, television cameras and photographers for the media.

During the International BID Award Celebration, the awards were presented in the following categories:

According to these criteria:

The International Star Award for Quality, the International Platinum Star Award, the International Arch of Europe Award, and the International Quality Summit Award are awarded to each company as an entity, for corporate achievement, to recognize quality and excellence within one or several of the following concepts:
The information gathered by Business Initiative Directions through all channels, including the on-line macro poll, is analyzed by the International B.I.D. Selection Committee, which makes the final decision to select the annual awardees

Nasa Comercial was recently awarded the QC100 Total Quality Management Model. This award was presented to Nascimento Alberto on the 30th April 2012 in Frankfurt.

The QC100 Total Quality Management is a management style model based upon producing quality service, as defined by the customer, who grants the award symbolizing commitment to quality. TQM is defined as a process of quality-centred, customer-focused, fact-based, team-driven and senior-management in order to achieve an organization’s strategy through a continuous course of improvement. TQM principles are also known as a total  quality improvement, world class quality, continuous quality improvement and total quality leadership. The QC100 TQM associated with the Quality Award it was designed for an easy understanding of  the principles and a fast assimilation into the company culture. QC100 means Quality Commitment to the 100 points of quality contained in the model, which are divided into 10 areas covering all of the levels of the business company operation.

MORE ON THE ARCH OR EUROPE AWARD

NASA Comercial, from Angola winner of the BID International Arch of Europe Award in Frankfurt

Frankfurt hosted the International Arch of Europe for Quality and Technology Award to reward highly-qualified professionals currently involved in big projects, whose decisions affect millions of people around the world and whose work meets the criteria of the ISO 9000 and the QC100 TQM model. All of them were present at the 2012 BID Quality Award.

Eng. Nascimento Alberto, President & General Director of NASA Comercial, a leading company in its sector and in Angola, proudly accepted the BID International Arch of Europe Award at the International Quality convention in Frankfurt. B.I.D. chose the true financial heart of Germany as the site of this Awards Presentation because Frankfurt represents communication among countries and its influence is reflected in companies where multiculturalism shows that everyone can work together towards a greater good. Frankfurt is a city for corporate communication and services. Frankfurt represents a global center for business, communication and culture, where companies from all countries gather to work towards building a greater future together. The governing bodies of the European Central Bank and the European System of Central Banks,  which are responsible for managing the world’s second largest economy, the Euro zone, have their headquarters in Frankfurt and making it  the perfect site for B.I.D.’s International Quality Convention. Among the BID award winners in Frankfurt  included Federal State Unitary Enterprise VO “Safety”,  from Russia. This company has been providing security services to nuclear and electric centers since 1993 through its team of specialists with profound experience in their fields, showing true dedication to safety and quality. Franklin Electric, from Mexico was in attendance. With its headquarters based in the U.S., Franklin Electric operates on a global scale with facilities in Europe, Eastern Europe, Africa, North and South America, and Asia. It is one of the most important providers of complete water and fueling systems in the world, and the largest manufacturer of submersible electric motors.

Grupo Creluz, from Brazil was also recognized. Grupo Creluz, a power distribution cooperative, operates in 36 municipalities in the North Region of Brazil and provides energy and comfort to more than 20,000 households, benefiting an excess of 80,000 people. Also present was Endiama E.P., from Angola (Empresa Nacional de Diamantes E.P.), the national diamond company of Angola with the exclusive concessionary of mining rights in the domain of diamonds. Endiama produced 8.55 million carats of diamonds in 2010.
Representing Australia was Draggin’ Jeans Pty Ltd, the country’s premier manufacturer of high quality motorcycle clothing and the only casual motorcycle brand in the world to have ever passed the CE Tests for Abrasion, Burst and Tear resistance. The CE logo is a universally recognised symbol of product quality and durability. Iranian Offshore Engineering & Construction Co. (IOEC) from Iran, attended as well. Ranked 67th among the top 100 companies in Iran, this previous B.I.D. award winner has over 1,000 employees, $600 million USD in assets, and more than $7 billion USD in contracted projects in the oil and gas industries. Also representing Iran was Karafarin Insurance Company. This customer-satisfaction and quality-driven company is the top private insurance company in the country. With branches throughout Iran and with plans to expand, Karafarin Insurance has total capital of more than $200 million USD. Among these winners from around the world was -Kampuchea Tela Limited , from Cambodia. One of the major petroleum companies in Cambodia and among the country’s big five oil and gas distributors, it has 38 gas service centers, representing an estimated 30% of the market share. Through a joint venture with Sokimex, Cambodia’s leading conglomerate, Tela, controls 80% of the country’s domestic oil and gas distribution. Another company on the list of winners in Frankfurt was -S.N.T.G.N. Transgaz S.A. from Romania. Operator of the Romanian National Gas Transmission System, it held the most successful IPO ever on the Bucharest Stock Exchange with the highest value of shares offered for sale and the greatest share demand in the history of Romania, raising a total of $2.52 billion USD. The companies honored in Frankfurt were recognized not only for their entrepreneurial achievements, but also for their dedication to continuous improvement and innovation, while abiding by the principles of the QC100 Total Quality Management Model. This formula created by BID, fosters business success through valuing a commitment to quality, customer satisfaction, communication, benchmarking, information analysis, leadership, planning and decision-making, human resources, continuous training, production systems and business results. The main focus of the QC100 Total Quality Management Model’s is a commitment to quality and innovation, characteristics possessed by all of the winning companies in Frankfurt in 2012 who serve as examples for other companies that wish to progress in the ever-changing and challenging economic, technological and business environments. The companies awarded by BID are not only successful but also serve as motivation for the rest of the global business community by contributing to the economies of their countries and developing technology that changes the world. A key example can be seen within NASA Comercial who provides a spirit of innovation and positive growth, exactly what we need to overcome the current global economic situation. Commitment to Quality, one of the core requirements for winning a BID award, can be seen through the world-class companies previously honored with the BID International Quality Award. Companies which already share BID’s corporate image in their logo are present in more than 170 countries and include world-renowned names on the Fortune 500 list such as: Wal-Mart Stores (1) Indian Oil Corporation Limited (98); Korea Electric Power (271); Beijing COFCO Plaza Development (366) and CH2M Hill International Holdings BV (422). Other previous BID winners worthy of mention include Turner Construction (USA); Haki (Sweden); Ansaldo Energy (Italy); Zepter (Austria); RAO-Unified Energy Systems (Russia); Als & Cachou-TBWA (France); Tata Group (India); Plamex-Plantronics (USA); Dogus Holding A.S. (Tukey); Franklin Electric (USA and Mexico); QMS International from the United Kingdom, FSUE VO “Safety” (Russia); and Viking Line (Finland). Eng. Nascimento Alberto proudly stood before the international community present at the 2012 International Quality convention in Frankfurt, sharing the achievements of NASA Comercial, as well as the company’s future plans and goals. Instead of yielding to negative situations or the pressures of the current global economy, NASA Comercial spends every day excelling in quality and creating a competitive edge; a clear indication of their affirmative role as a leader. For this reason, NASA Comercial was named a winner of the 2012 BID International Arch of Europe Award in Frankfurt; a trophy which BID presents to those companies from around the world that best adhere to excellence and innovation in their practices, putting quality first.